The samples below use my Contoso University sample solution which I use for demos and talks. All the source code is available on GitHub.

Why use Entity Framework migrations?

Entity Framework migrations provide a great way to manage your database schema changes in code. It produces the same SQL each time a migration is run, which means it can be run reliably in each environment as you promote code. It also avoids the overhead of manually producing SQL migration scripts and either handing them off to DBAs to run at deploy time or using tools such as DbUp to run them.

But can't you only run EF migrations in Visual Studio?

In short, no. If you've used EF migrations, you'll be familiar with the PowerShell command Update-Database to run your migrations in Visual Studio.

EF also ships with a little known tool called migrate.exe which allows us to run migrations from the command line. Using this tool we can wire a database deployment step into our Octopus Deploy process.

In order to deploy our database we need to create a NuGet package for Octopus to use. Simply add the OctoPack NuGet package to the project which contains your DbContext and migrations.

Octopus has a convention where if a package contains a Deploy.ps1 file, it will be run at deploy time. This is the hook we'll use to invoke migrate.exe. In my sample solution I have a Deploy.ps1 file which looks like this:

The important parts here are:

Once the database is deployed, you'll need to set some permissions on it. I like to include a SQL script to do this in my database project. In my sample solution I have a set-database-permissions.sql script which looks like this:

You'll need to alter the database and user names, or better still parameterise the script so that Octopus can inject the correct values for each enviroment.

Out of the box, the Deploy.ps1 and custom SQL scripts won't be included in NuGet package produced by OctoPack. To include them we need to use a custom .nuspec file. In my sample solution I use this .nuspec:

The important part here is the files section. It tells OctoPack to:

To deploy the database I make a process in Octopus which looks like this:

The Deploy Database step is simply a deploy package step.

The set database permissions step uses the execute SQL script file step template from the Octopus Deploy Library. I have it configured like this: 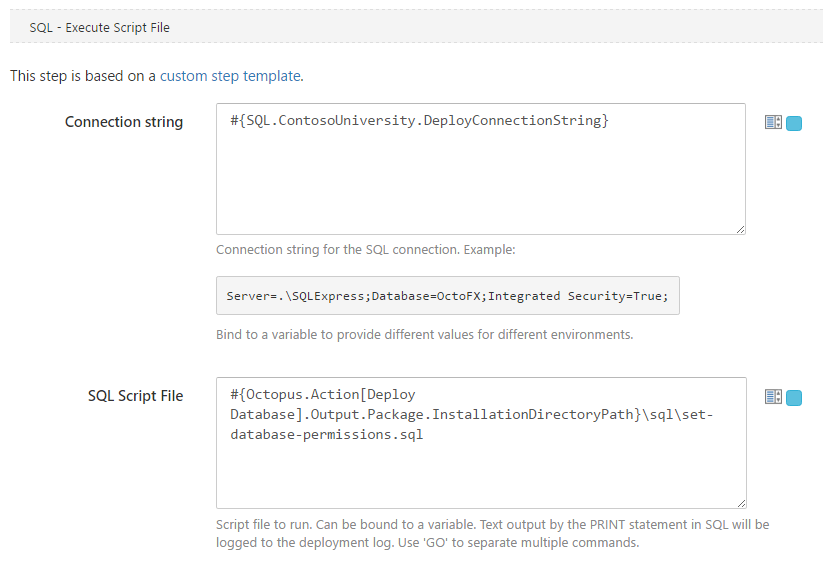 The final piece in the jigsaw are the Octopus variables. I have a variable set with the following names and values for my demo deployments:

To summarise, by packing the migrate.exe tool into a NuGet package along with our Entity Framework migrations and any additional SQL scripts to set permissions etc we can automate our SQL database deployment.

If your Windows development machine doesn't support virtualization you can still use Docker to run Linux containers. In this…

How to find out your NuGet dependencies in code

Last week I wrote about how my client uses LibGit2Sharp to clone all the Git repositories in their universe.…